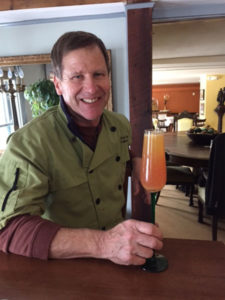 I grew up in New Orleans, hence the reference to Louisiana cooking on the Inn’s website. My south Louisiana background influences the food served at Follansbee Inn and the feel of the Inn. Guests love the breakfast and often comment on the Inn’s “southern hospitality.”

Growing up in the south, I did not think our manner of treating guests was anything special, but I have come to appreciate the distinctions. It’s not that other areas are inhospitable, it’s just that in the south how one treats guests is a measure of one’s character; we take it personally and seriously, giving our all to make guests feel at home. Indeed, many guests tell us that they feel at home at Follansbee Inn.

Innkeeping is my third career. Before innkeeping I was a geologist and then (forgive me) a lawyer. My professional life took me to Lafayette, Louisiana. Lafayette is the heart of the Cajun culture whose food is so popular throughout America. (New Orleans has little to no true Cajun culture.) In Lafayette, I came to better understand all things Cajun and learned much of the Cajun way of cooking.

Outside of Louisiana, Cajun food is mostly thought to be spicy, but really the focus of Cajun cooking is well seasoned food. New Orleans cooking is more influenced by the sophisticated French or Parisian style, Cajun cooking bears more country influence. Having lived in both areas, I believe I bring a mix to the food served at Follansbee. In any case, guests seem to love our hot, homemade breakfasts, such as poached eggs with hollandaise on corned beef hash (made with home corned beef), Cajun eggs benedict (poached eggs with hollandaise on fried boudin), frittatas (with asparagus, gruyere cheese, and roasted tomatoes), beignets, praline bacon, angel biscuits (truly a guest favorite), lemon ricotta pancakes, the world’s most awesome sticky buns….

I was drawn to the Lakes Region of New Hampshire after several vacations to visit my brother, a resident of New Hampshire for more than 20 years. Seeking a change in life (imagine, being tired of practicing law), I purchased and moved to Follansbee Inn to assume the role of innkeeper, cook, etc. I was drawn to Follansbee because it is a beautiful, iconic building and because of its location on Kezar Lake, which I knew would serve guests very well in every season.

Moving from a warm, flat region where a thin crust of ice on a bird bath is cause for excitement, to a cold region where lakes are covered for months with ice more than 20” thick; from an area whose highest peak is a mound of dirt – Monkey Hill – that tops out at less than 30’ above sea level, to one surrounded by 3,000’ mountains has been an adjustment. Changing from law to innkeeping was even more of an adjustment, but one I’ve done with zeal and gratitude. Innkeeping is the career for which I was born. 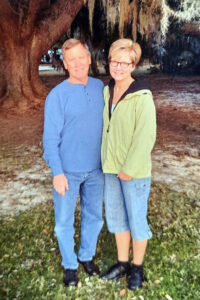 My focus, my passion, throughout this learning process has been guest relations and learning to cook memorable breakfasts. In Louisiana, we are passionate about our hospitality, and we live to eat! I hope to impart this passion to the guests of Follansbee Inn. I would be remiss if I did not mention the Follansbee staff, my wonderful housekeepers and helpers and of course, my dear Nancy and the Follansbee Inn canine hostesses Angel and Grace, all of whom play a vital role in the Follansbee Inn experience.

It has been a gift to meet the wonderful guests of Follansbee Inn, who bring their own interesting stories, while living in one of the most beautiful areas in America. I thank all my guests who have made this life a reality for me and have made Follansbee a renowned New England destination through complimentary reviews, word-of-mouth recommendations, and their own gracious role within the “Follansbee family.”

I look forward to welcoming you many times, as you will hopefully, as many guests do, make a point of returning as often as possible to Follansbee Inn!